Now there are some place names to conjure with…

A romantic weekend in Iraq, you say? Hard not to lead with that line, especially as it was the one I used to tempt my then travel buddy into accompanying me to Iraq. Turned out (spoiler alert) it wasn’t all that romantic. Which was OK as I didn’t like her all that much anyway.

No matter. An impromptu weekend in Iraq. Is it even possible? It was then, though since the advent of the so-called (I hate this ‘so-called’ bollocks. They are not Islamic. They never have been Islamic. They are tiny-dicked wankers mewling about how the world isn’t the way that they think it should be) Islamic State and the expansion of the war in Syria, Erbil is now out of bounds. Back then, though, it was an easy FlyDubai flight away. And as Erbil counts as Iraqi Kurdistan, I didn’t even need a visa.

As I have mentioned elsewhere, my maternal family are Greek Cypriots. Thus, we are inclined to dislike Turks. Or, at the very least, disinclined to like them. As they ‘vanished’ nearly 2,000 of our people in 1974 and have refused point blank to discuss the matter. In the same way that they have refused point blank to discuss the matter of the million Armenians they tried to wipe from the face of the earth in 1915. So, when I come across a group of people who do not like the Turks, naturally, I am sympathetic. Cue the Kurds.

By and large, the Kurds are the most welcoming, friendly, open people you will ever meet. They have their own elaborate customs regarding hospitality, which boils down to the fact that if you are friendly, you will never, ever feel more welcomed. If you are not friendly, however, you are royally fucked. This is a small, culturally homogenous group of people who have never tried to fuck with the world, and yet who have had the two largest regional powers (Turkey and Saddam Hussein’s Iraq) try their best to wipe them from the face of the earth. This is a country (and if they are not a country in legal standing the they are in every other fucking way) that responded to so-called ISIS with their women volunteering for the front line as the ultra so-called Islamic ‘fighters’ don’t get to go to their pathetic so-called heaven if they get killed by a female. In short, you do not fuck with the Kurds. Let me reiterate: YOU DO NOT FUCK WITH THE KURDS.

Having said that. I had a lovely time in Erbil. And the Kurds I met were absolutely delightful. But then again, I did not try to fuck with them.

Erbil airport was perfectly nice. Not a phrase you would normally use in travel journalism, but heading for Iraq, I really did not know what to expect. I got the all-important Iraq stamp in my passport, courtesy of unsmiling but nevertheless pleasant border staff. Taxis were easy to come by, and, thanks to a booking sheet provided by the hotel in Kurdish, we got to where we needed to be without any problems at all. The hotel itself was…OK. Very OK. not cheap, but not expensive, it was on a par with many places I have stayed in Eastern Europe that have heard what needs to be done to be a decent hotel, but have never actually experienced one. The owner met me at reception, and, obviously very proud, went through the different things the hotel provided. Which amounted to breakfast from the bakery downstairs and the possibility of booking tours. As I wasn’t there for long enough to book a tour, I held high hopes out for the breakfast.

Erbil now is, sadly, a no-go zone. Back then, it was a safe enclave, even though it is less than 40 miles from Mosul and Kirkuk. Kurdistan was not a central part of the war in Iraq. However, now the Kurds find themselves at the front line in the battle against ISIS or Da’esh or whatever the fuck those psychotic shit-for-brains and rocks-for-souls want to call themselves. It is even sadder given the aspirations that the Kurds were showing when I visited. As already mentioned, Kurdish hospitality is second to none. Before the war in Syria boiled over, they were really trying to make this hospitality into the foundation of their economy. In the course of my visit, more than one person told me that Erbil was to be the new Dubai. Without being aware that I had just flown in from Dubai. There were signs of this everywhere – much like Dubai, a lot of Erbil was building sites. And building sites, in this instance, denoted ambition. Hotels. Malls. Casinos. Restaurants. The Kurds were really trying to turn their capital city into a luxury resort. And given their singleminded drive (not to mention that hospitality!) I am certain that, if shit in Syria hadn’t overflowed, they would have made it.

However, at the time, the people I met were fountains, geysers of enthusiasm about their great future. But their present – well, their present was pretty much a building site. You could see how things were going to take shape, but for the time being, there was not a lot going on.

The Qaysari Bazaar – the oldest souq in the world

The hotel was a brief walk from the city centre. The first evening, I wandered in for a look around. There was a bright and lively covered souq: Qaysari Bazaar, which happens to be the oldest souq in the world. And, as is the case with most souqs in the Middle East, a place where you can buy pretty much anything. There is also the main city square: a wide and impressively Arabic-looking space with cafes and fountains. And, dominating everything, the Citadel towering over the town. I took some photographs, had something to drink and returned to the hotel via a liquor store (well, there really is only so much hospitality a miserable introvert can take, after all) and that was that. 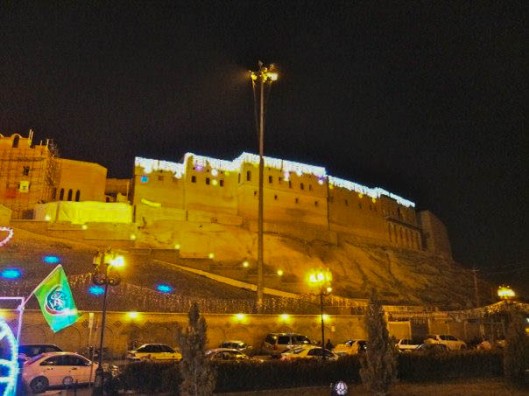 The Citadel by night 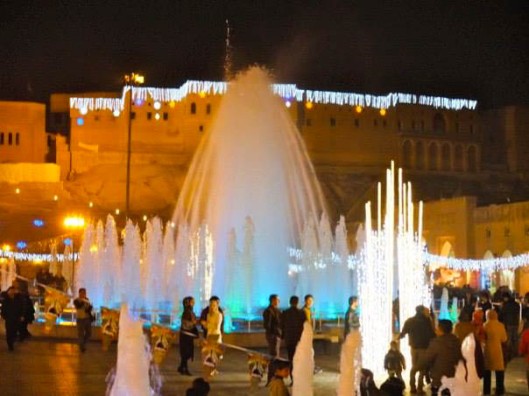 City square and fountains. Oh, and the Citadel.

The next morning, there was the breakfast. For which, as already mentioned, I held out high hopes. And I was right to. It was basic – feta, peasant bread, yoghourt and boiled eggs. But, wow, it was incredibly fresh. And in that way, as good as any buffet 5 star breakfast I’ve ever had. I’m a sucker for really fresh bread, and I swear that these big, pillowy flatbreads had been dough not quarter of an hour before.

Signage at a local mall

That day was my only full day in Iraq. After breakfast, I went straight into town. It was somewhat sleepier than the previous evening, so I made my way immediately to the Citadel. The Citadel is really quite something. I knew before I arrived that it is a UNSECO World Heritage site – continuously inhabited for over 7,000 years. It towers over the city, not built on a hill but on seven successive layers of civilisation. It has over 600 houses split into three areas. And it was even more impressive in real life – craggy and imposing, the butter-yellow walls sheer at the top of their cliffs. It was quite a climb to the entrance gate, at which I arrived, out of breath and steeled for ancient splendour.

Only to find it was closed.

It was still possible to walk a short way down the main street, but the houses were all cordoned off and barriers prevented me from seeing much. It was, in effect, a 7,000 year old building site. As that is exactly what they were doing – rebuilding and renovating at a massive cost ready for those good times just around the corner.

The main thoroughfare in the regrettably closed Citdel 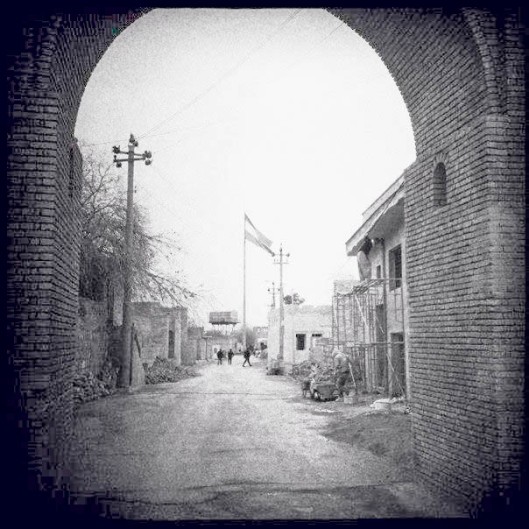 Ahmadi Gate – the entry point to the Citadel

The site of a battle between Alexander the Great and Darius III of Persia. That’s some history!

The Erbil Civilisation Museum is worth a visit too. Probably. It was also closed. Undergoing renovations. At the time, I cursed myself for not visiting a year or two later once this shining new metropolis was open for business. Now, however, I just consider myself lucky that I had the chance to visit when I could.

That evening, following internet advice, I got a taxi to the Mamounia Skybar at the Noble Hotel on the edge of the Ainkawa area. Being from Dubai, land of ridiculous skyscrapers, I scoffed a little at the place being called Skybar and being on the 7th floor. But it was pleasant enough. It had a shisha terrace (covered and heated, but still a little chilly) and the food (generally western cuisine – it is an expat hangout after all) and the beer were OK. If that seems like damning with faint praise, well, I suppose it is. Again, my expectations of soi-disant ‘swanky’ places has been somewhat wrecked by living in Dubai. But then I generally don’t travel in order to visit hotel bars. It was just that in Erbil I couldn’t seem to find much else to do. And, please, this is much more a comment on my own introverted lack of adventurousness than on Erbil itself – I am certain that there are thousands of wonderful local places that serve fantastic Kurdish food and are overflowing with warmth, conversation and laughter. But I didn’t know where to find them. And I didn’t like to ask.

Hey, it’s who I am. Read the blog’s strapline, OK?

I left Erbil hoping that one day I might get to return and see it in its newly-minted luxury-resort glory. Or at least get to return when the Citadel was open. And, indeed, I still hope that. And although I am a miserable introvert, I was thankful for the welcoming reception I got from the Kurds that I met. God (sarcasm) only knows they have every right to distrust foreigners, but by and large, they don’t. Above all, though, I hope they stay safe. Every single one of them. Even though I know, with the heaviest of hearts that that cannot be the case. If any nation (and it is a nation, whatever your maps might say) deserves some sort of divine protection it is Kurdistan. Unfortunately, as history has shown (and as current affairs continue to show) it has long been very much a case of the opposite. 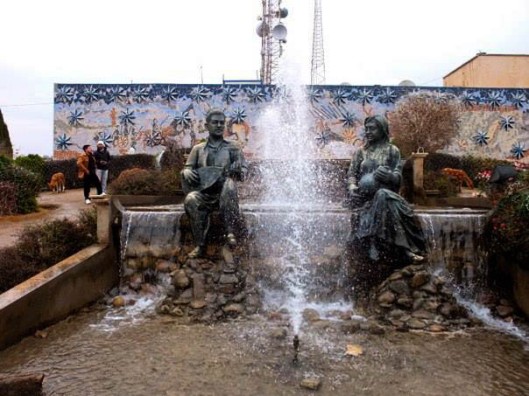 The Kurds. Even the statues are welcoming.