The day after driving the south coast and visiting the iceberg lagoon and astonishing ice caves, I was all set to tour the famous Golden Triangle – the tripartite tourist trail featuring the Gullfoss waterfall, the Geysir geysers and Thingvellir national park. I set out very early the next morning as it was a two hour drive to Gullfoss, where I would start the day’s tour. The sky was still overcast, with enough snow, both falling and on the ground, to slow my progress somewhat and to make concentrating on the road rather than the scenery the order of the day. I arrived at Gullfoss ahead of the majority of the tourist coaches (that being the plan!) and slogged through the knifing cold up some wooden steps to a vantage point. I didn’t see much on the way up as I was swathed like a mummy in as many layers of clothes as I had managed to fit on, leaving a burqa-style gap to look through. When I got the point overlooking the waterfall, the coverings came off. The cold and the discomfort were worth it. Once again, words failed me. 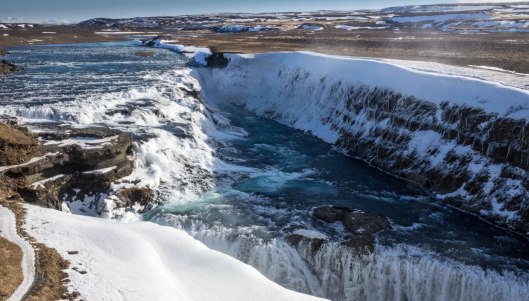 For much of the 20th century, Gullfoss waterfall was leased to foreign investors. However, various plans to build a hydro-electric power-plant on the site thankfully came to nothing and the falls were returned to the care of the Icelandic government. It is now, unsurprisingly, a protected area. I walked and marvelled and photographed for as long as I could physically stand the cold, then returned to the car for the next leg.

Geysir is actually the name of a geyser, and, indeed, from where we get the word geyser. It is also the name used by the whole area, about 10km downstream of Gullfoss, where the geyser, along with other hot springs, is located. The first thing you notice getting out of the car, is the smell of sulphur. Like the surface of hell. Or the toilets of a particularly unhygienic restaurant. There was a short walk from the car park to the entrance to the hot spring area, incongruous for having to step carefully along a snowy and heavily-iced pavement while steaming, bubbling water ran down the gutter by its side. There are two active geysers here – Geysir itself which erupts up to 120m high, but somewhat infrequently, and Strokkur which only reaches heights of 30m or so, but does so every few minutes. At the time I was there, no eruption of Geysir was likely, the geyser instead being a faintly menacing, slightly simmering cauldron against a frozen landscape and a cast-iron sky.

Strokkur, however, was more obliging, and, without its larger brother for comparison, still pretty damn impressive. 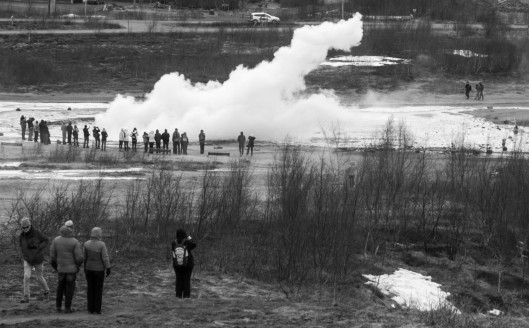 After a few cycles of eruptions, I went to the visitor centre to fortify myself for the next,
(and more generally outdoors) part of the trip with some vastly overpriced lamb soup and a cup of coffee that looked like volcanic mud, and couldn’t have tasted a great deal worse.

Þingvellir (Anglicised as Thingvellir) was another hour’s treacherous drive through rapidly changing weather systems. But by the time I arrived, the squally semi-blizzards had given way to still air and relatively clear, blue skies. Thingvellir national park is a rift valley between the Eurasian and North American tectonic plates. It is also the site of the world’s oldest parliament, the Althingi, which first convened in the summer of 930CE and continued every summer until a move to Reykjavík in 1800. Today, it is one of Iceland’s biggest tourist attractions, drawing sightseers, hikers and even scuba divers interested in exploring the massive underwater fault between the two continents. Needless to say, it was a little too cold for me to try my hand at scuba diving. And even if it hadn’t been, I wouldn’t have. But the sightseeing and hiking were definitely on the agenda. First, a walk up to the visitor centre along a slowly rising, craggy path that, at its summit, gave unparalleled views across the national park. 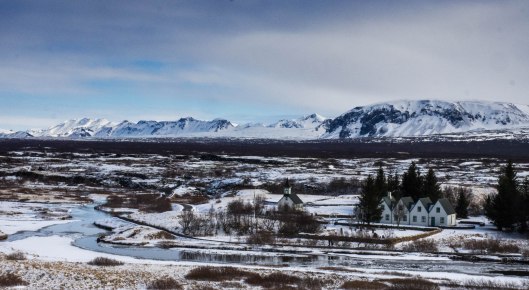 Thingvellir from the visitor centre

Then a slow meander down the the houses and church and river, and a gentle stroll back to the car park. The sun was out enough to make shedding layers a requirement, and all in, it was one of the most gently pleasant experiences of my trip thus far.

Thingvellir back to Reykjavík should have taken about thirty minutes, but once again, Iceland’s split personality stepped in. Within 5km of leaving the car park, I was down to 30km/h and very limited visibility. As the squall passed, I was able to pull into a lay-by and take some pictures of what I can only describe as the most prehistoric landscape I have ever seen.

Thingvellir, with a storm departing

Back in Reykjavík, I found a supermarket and an off-licence (such prices! Enough to make you weep) and returned to the same hostel as before and settled in with the lights off and curtains open to watch for breaks in the sadly incessant cloud cover through which I might glimpse a hint of Aurora Borealis. AB or not AB? That was the question. Not AB, sadly, was the answer. (I’m sorry! I’m an English teacher. I can’t help it!)

I had the whole of the following day to see Reykjavík (and the Reykjanes peninsular, if I so chose). I had already decided that I would not bother with the Blue Lagoon, however essential the various tourist guides said it was. I was not interested in swimming and didn’t much fancy paying a fee just to walk around. Maybe next time. So I prioritised the city itself, and set out at 11am to spend the entire day exploring it.

I wandered down to the harbour, and wondered what to do next.

In the end I narrowed it to either a 4 hour whale-watching trip around Reykjavík bay, or returning to the hostel to collect the car and then driving round the Reykjanes peninsular. By a happy accident, lassitude won out: there was a warm coffee shop to sit in while waiting for the cetaceous tour and it was a long, cold walk back to the hostel. Great decision. I loved the whale-watching tour. Having tried similar in Mirissa, Sri Lanka only to be stymied by the tail end of a monsoon, I thought I was a jonah. I wasn’t expecting any degree of success. As a miserable introvert, I do tend to ascribe failure in any particular endeavour to a weakness in my own personality. Hey! It’s what us miserable introverts do! In addition, the various online sources said that this wasn’t the best time of the year to see whales. But I paid my money and boarded the ship with at least a little hope.

It was going to be cold out on the water. It was cold everywhere, of course. But it was going to be even colder. The downstairs salon of the boat (the largest whale-watching ship in the harbour, the ticket-seller proudly proclaimed – true, but it was exactly the same design as most of the other whale-watching ships in the harbour) was filled with racks of thermal onesies. I dutifully found one my size and clambered in. It fit, after a fashion. Basically, it kept me warm but I had a choice between standing up straight or the possibility of fathering children at some point in the future. But not both. Comfortable it was not. Once the boat set out though, dear god and by odin’s beard was I glad I had it on. Much like ‘incredible’ doesn’t even begin to explain most of the Icelandic scenery, ‘fucking freezing’ doesn’t come close t0 the experience of standing on deck for the first hour of that journey. 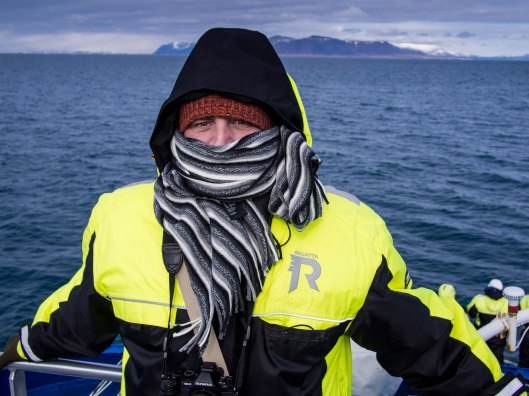 All set for whale watching

Once we were clear of the lee of Reykjavík bay, things got a little better. There was enough sun to lower the hood on the onesie, but for four freezing hours, that was as warm as it got.

There were several other whale-watching boats nearby, but we seemed to have the best (or luckiest) captain, as most of the whales that breached, did so closest to us. Much like a safari I once did in Kenya, I wasn’t expecting the extent of the emotional impact of being close to these creatures. I know that sounds wanky, and that anyone who knows me would say that, yes, I am wanky, but definitely not in a cooing over animals sort of way. But if you don’t believe me, when I say it is something else, I can only suggest that you try it some day. 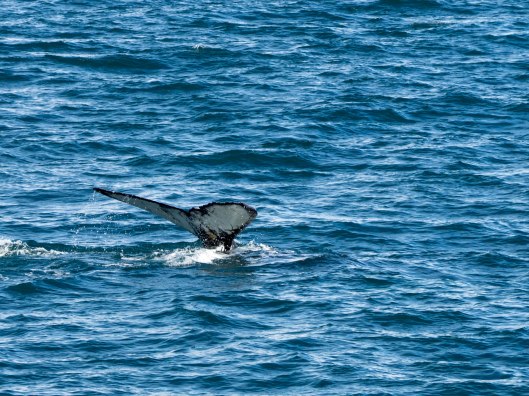 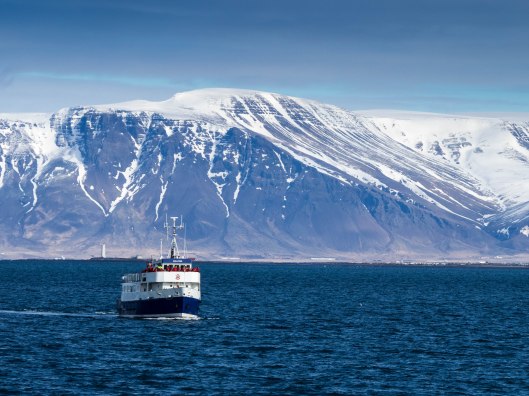 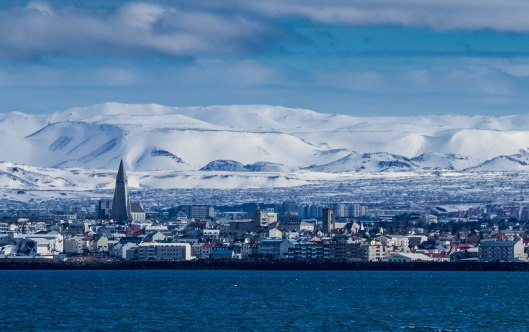 Reykjavik from the sea

Back on dry(ish) land, I returned to the hostel by way of HallgrÍmskirkja – the church whose 73m high tower dominates the city. Construction began in 1945 and took over 40 years to complete. It is an incredibly striking building. As a lover of both modern ecclesiastical architecture and concrete (and there is a big overlap in the venn diagram there) Hallgrímskirkja is something else. An attempt to develop an idiomatic Icelandic architecture, the building is designed to mirror the hexagonal basalt columns formed by lava flow in many parts of the country. And, at least to my eyes, it is just beautiful. Amazing. Incredible. See? Even for the man-made parts of this fantastic country, I don’t have the words.

The tower is also scaleable, and, even better, has a lift. Eagerly, I handed over the entrance fee and waited in line at the lift doors. Just as the lift arrived and I boarded, the attendant placed a sign outside the doors – we were the last group up for the day before it closed. Talk about serendipity! The views from the top were predictably stunning.

Reykjavik from the top of Hallgrimskirkja church tower

As I had a very early start the following morning, I returned to the hostel. First things first, I had the hottest, longest shower I could to wash the cold from my bones. After drying off, I found I had locked myself out of my room. I called the hostel manager (who happened to be one of the most beautiful women I had ever encountered) and she came up to unlock the door. As my room was right by the bathroom, I had a moment of utter, nauseating embarrassment when the bathroom door swung open and the stench of rotting eggs billowed forth. I was about to explain that I’d only had a shower when she smiled and told me that the hot water was geothermal and always smelled like that. This was a relief, as I had indeed also had a poo.

So, packed in readiness, I lay back and reflected on my holiday. I hoped that the 3am drive along the Reykjanes peninsula back to Keflavík airport might yield one last spectacular showing of the northern lights. Alas, this would not prove to be the case, despite clear skies. It would have been lovely, but as it happened it didn’t matter so much. As I lay there on my small, single bed, four hours before I was due to leave, I looked out of the window to see a single, sinuous tendril of phosphorescent green extend across the sky, like an exploring tentacle, before withdrawing again. I leapt out of bed, clambered into my clothes and grabbed my camera and tripod. Outside was the crispest, coldest, clearest night you can imagine. Above: a few stars and the occasional cloud, but no more aurora. It didn’t matter. I know what I saw.

I saw the northern lights.

My summary – Iceland: impossible to summarise. Beyond belief, beyond language. Just go there.