My third trip with my new Trekkup family (yeah, yeah, I’m still a miserable introvert at heart, OK?) was to Khartoum and Meroë in (North) Sudan. Having visited Iran the week before and Iraq some years previously, my passport was certainly going to make any prospective visits to Trump’s USA problematic. But that’s a future bridge to cross.

Although Sudan is only a four-hour flight from Dubai, it is not somewhere I had previously considered visiting. Primarily because I am very lazy and somewhat introverted and it is a difficult place for a solo traveler – the visa requires invitation letters etc. and it is not a country, despite its impressive history, that courts tourists. This is one of the places where Trekkup come up trumps (sorry if recent posts seem like adverts for the company, but they really are brilliant). All we had to do was visit the Sudan Consulate with the paperwork (provided by Trekkup), two photographs and some cash and everything was sorted. The only downside? The fingerprinting process at the Consulate made me look like a criminal when I returned to school that afternoon.

We arrived in Khartoum at just past midnight to find that our driver had not arrived yet, giving us ample time to take in the sights, sounds and smells of this new country. One of the downsides of frequent travel is that new places rarely seem that new; it takes a lot for somewhere to truly feel fresh and strange. No matter how many times I visit, Kathmandu always feels different and exciting. And the area in front of Khartoum Airport also promised a fresh (if not fresh smelling) experience. There were people everywhere, from small children dressed in suits and ties to old men stretched out asleep on the pavement.

Once clear of the airport, however, Khartoum quickly quieted down. The streets, at this time, were largely empty apart from occasional stray dogs and somnolent singles presumably making their way home.

We arrived at the hotel and found, after quite some time spent sitting on their squeakily plastic-covered sofas, that despite the fact that we had the rooms booked and had specified a late arrival, they had decided to give the rooms to someone else. 1 am, and nowhere to sleep. Great stuff! Thankfully, Marion, our Trekkup leader, was on the case and we were shortly whisked off to the Acropole Hotel, which was much nicer than the first place anyway. It turns out that the Acropole (so-called as it is run by second generation Greek immigrants (much like the guesthouse I stayed in In Sighisoara, Transylvania! – We get everywhere!) is the oldest hotel in Khartoum and has played  a significant role in much of the humanitarian work that has taken place in Sudan since the hotel opened in the 1950s. Despite being resolutely old-fashioned, the hotel was utterly delightful. 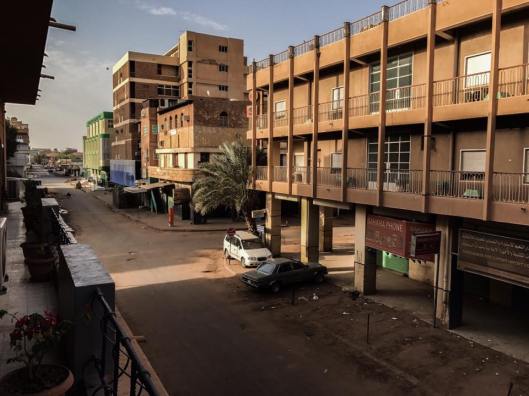 A good night’s sleep and a decent breakfast later, and we were ready to see the Sudan National Museum. Our guide, Mr. Sugar (at least I think that’s what he said his name was) was gentle, sweet, extremely well informed and almost completely inaudible. I tried standing close enough to hear, but ended up wandering around the museum by myself. Sudan has an incredible history that goes hand in hand with its northern neighbour Egypt. And the museum has some fascinating exhibits. But all in all, it’s about 20 minutes’ worth maximum. And we were there a while longer. I’m sure with more (audible) explanations (actually, to be fair to Mr. Sugar, I am crap at listening – I need to read to understand and the exhibits had some written explanations, but not many) I would have understood more, but as it was I had ample time to wander the grounds and take photographs. Not particularly good ones, as it turned out. 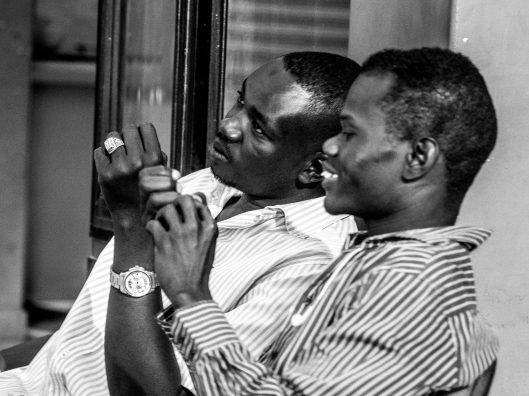 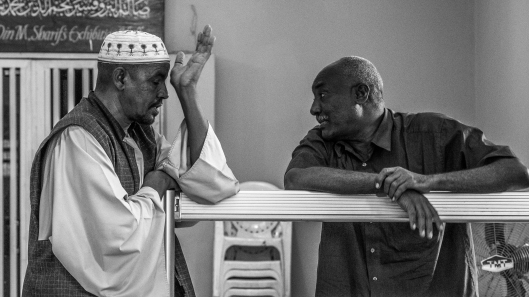 After the museum we headed to The Khalifa’s House museum, with 20 minutes to spare before its closing time of noon. Again, with a lovely but inaudible guide and very little signage, it was difficult to decipher what it was that we were seeing. But it related to General Gordon, whom I vaguely remember from my A-level history classes. Gordon was, by most accounts, a relatively decent member of the British Empire. He was fanatically anti-slavery and really did not want to be in the Sudan in the first place. Portrayed (somewhat less than faithfully) by Charlton Heston in the film ‘Khartoum’, he defended British interests (never a good thing) against the messianic self-proclaimed Mahdi (also never a good thing) Muhammad Ahmad (whose mausoleum we also visited). 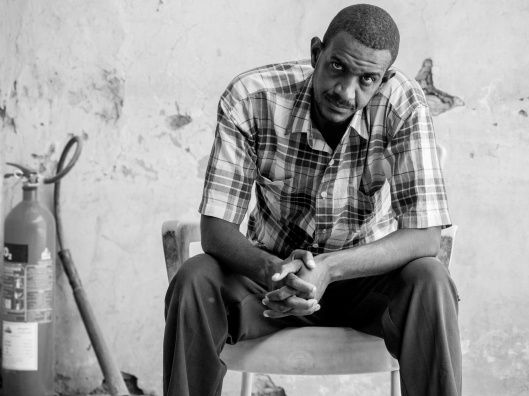 The Khalifa’s House museum was also mildly diverting, but without a deeper-than-my-basic-1989-exam-revision knowledge, meant very little. There was a pretty cool 7 barrel Vickers horizontal machine gun in the courtyard though.

The next stop was the market. It was initially fairly quiet as Friday is the Islamic day of rest. Most of the shops and stalls were closed, but it appeared little different from most other MENA souqs. The shops that were mostly open were the more tourist-oriented ones, generally selling carvings and sculptures and stuffed (literally) animals, though as some pointed out, a lot of the wares were from Kenya or other nearby places. Notable here were the street vendors, selling improbably piled seeds and other snacks. Often a family affair, as often as not there would be two, maybe three generations behind the mountainous pile of food atop the cart. 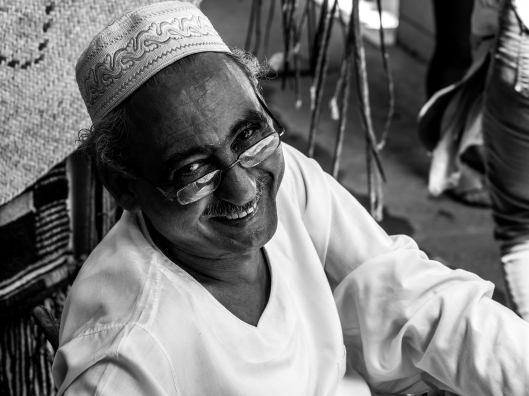 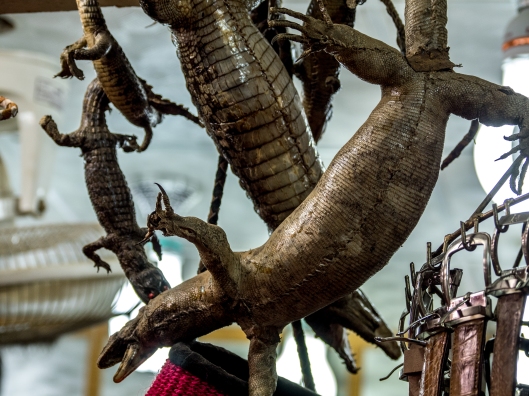 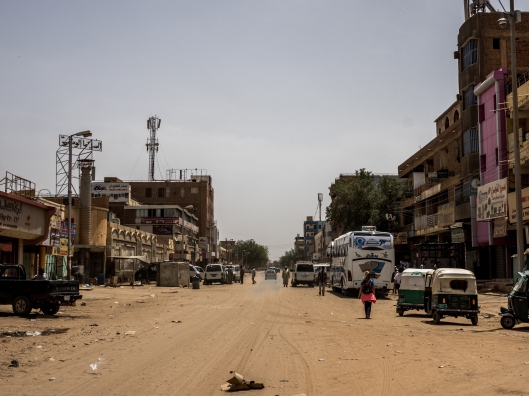 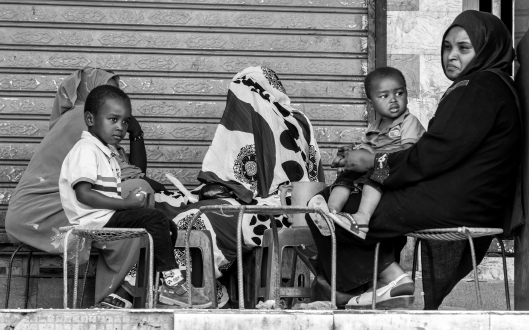 From the souq, we mounted the bus (whose interior was described memorably by Marion as coffin-like: much satin, many tassles) and headed out for the four-hour drive to Meroë and the pyramids – our main reason for being in Sudan.

The journey was long and bumpy. And dusty. And fascinating. We were travelling through a landscape that has barely changed in centuries. The further we got from the twin cities of Khartoum and Omdurman, the more people relied on donkeys and mules rather than cars and trucks.

The present and the future…

We had a toilet stop at the sort of place that you do not want to use the toilets. Unless of course you enjoy nightmares about poo monsters rising from a hole in the ground. And a lunch stop with superb food – we found out shortly afterwards that we had our own catering team ahead of us in a Toyota Landcruiser, cooking for us whenever we stopped, providing for us at our campsite and following us back to Khartoum the next day – typical of Trekkup’s attention to detail! The food, lunch and all meals afterwards, was consistently superb. All fresh, all local, and all very. very good. 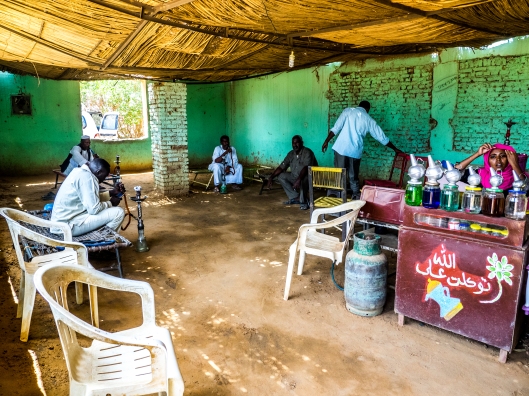 At the truck-stop for lunch

We arrived at Meroë an hour or two before dusk. Whilst the guides erected our tents, we took a sunset tour of the pyramids. Though they are not comparable in size to their Egyptian cousins, the pyramids at Meroë make up for it with exclusivity – we were the only people there. For those of you who have visited Giza, great as the spectacle indubitably is, have you ever been there with fewer than a thousand other tourists? Thought not. We were alone – no guides, no other tourists, no problem. It was just us and the camel touts who were, to be fair, remarkably good-humoured and patient. 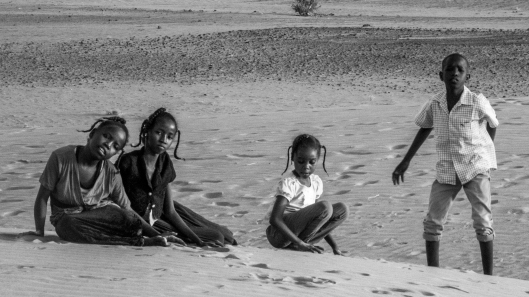 After we had seen our fill of pyramids (which date from 400BC to 200AD) we headed for the campsite – here we had a choice of a $5 camel ride or a 15 minute walk. Having been repeatedly assaulted by a camel I had the misfortune to ride in India some half a decade earlier, I walked.

I wasn’t sure about camping – an activity I had enjoyed as a younger man, but, like so many other things, one about which I worried my old bones would protest. We ate well and then celebrated Marion’s birthday, with cake, balloons and fireworks, which all felt a little odd in the middle of the desert. Lovely, though, nevertheless. Then came a real treat – a group of local men set up a campfire and proceeded to spend the evening singing and dancing around it. I was assured that this was not a normal occurrence – nor was it a tourist activity. I was wonderful. Haunting. Incredible. 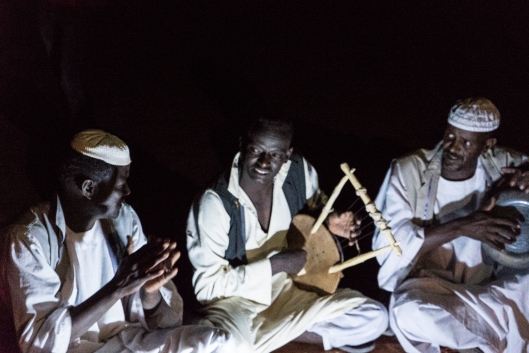 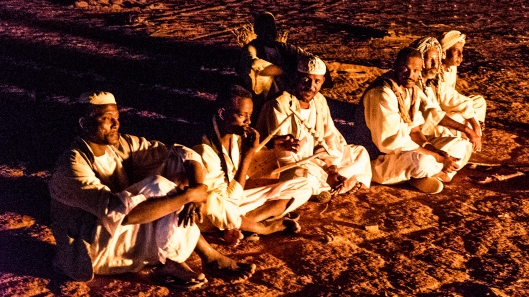 I slept well, considering I was in a tent and there was a very noisy donkey nearby.

The following morning, we toured the pyramids again. The vendors who had previously been by the gate to the pyramid complex had set up in a semi-circle around our breakfast table. Enterprising sorts. 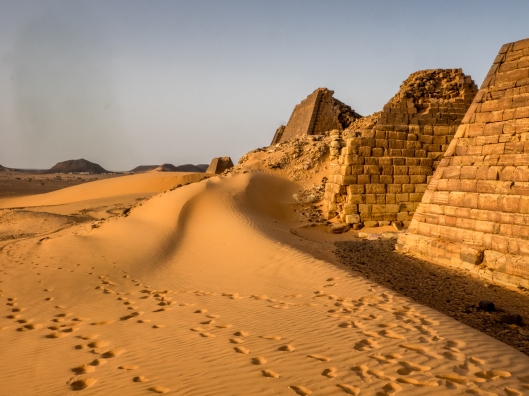 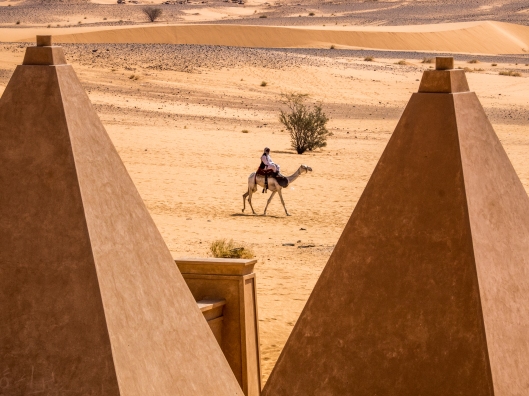 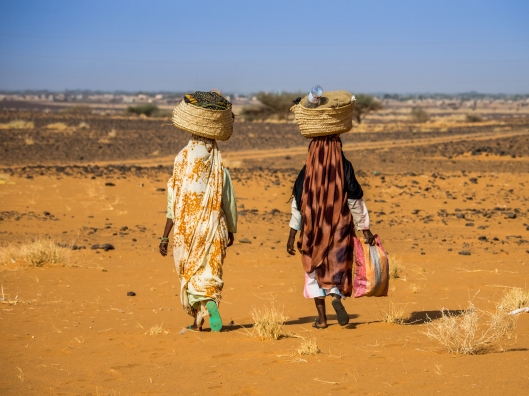 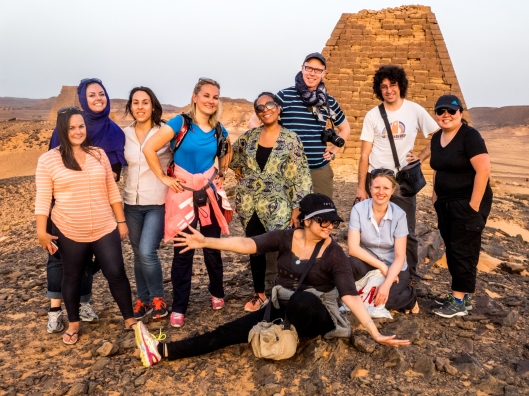 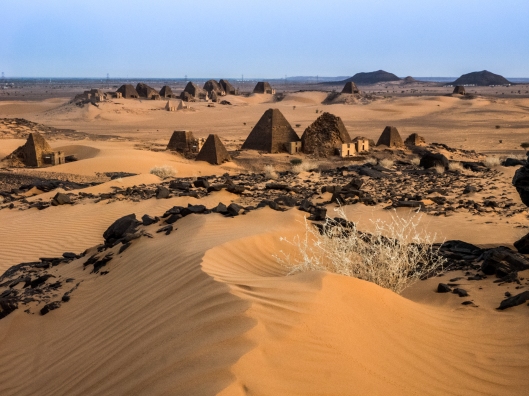 A few kilometres from the pyramid complex was the Royal City – a fairly fancy name for a few tumbled ruins in a grove of dusty trees. I dare say there is a great deal more there, and since 2014 the Sudanese and Qatari governments have been working together to excavate it (among other things). At the entrance to the area is a barracks-type building where archeology students from Khartoum University and others live while learning and excavating.

Then, the long haul back to Khartoum, (with another wonderful, catered, truck-stop lunch en route) where we headed to the confluence of the Blue and White Nile in the north of the city. A short trek through an abandoned amusement park (I always have time for abandoned amusement parks. I think I might be a Scooby Doo villain in the making) and we arrived at a scrap of land, at the end of which stood a lone fisherman. You could see the distinct separate colours of the two rivers where they joined. Which was much more incredible than it sounds. 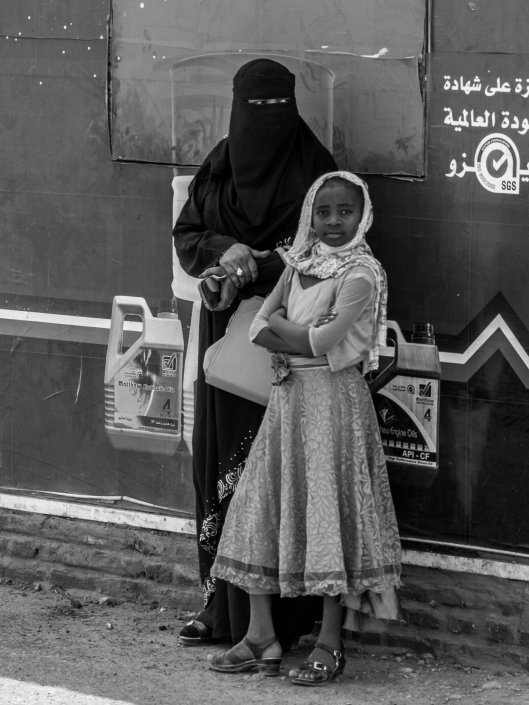 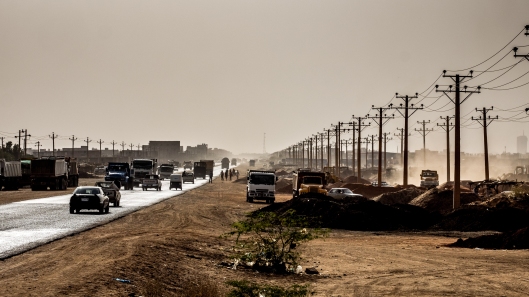 Everywhere surrounding Khartoum there are drifts of rubbish; mostly plastic bags. It’s about time that Sudan followed Rwanda And Kenya’s lead and banned them. The Nile in Khartoum 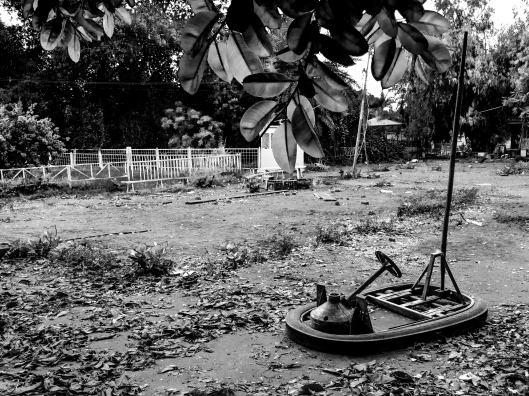 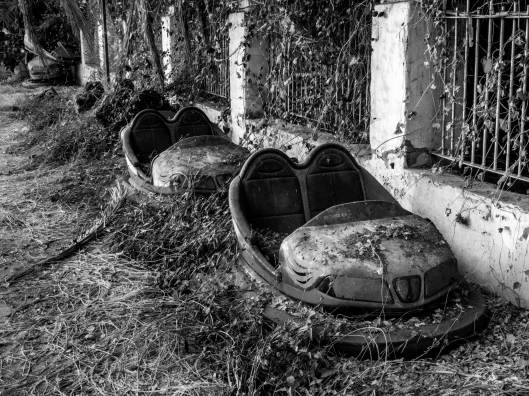 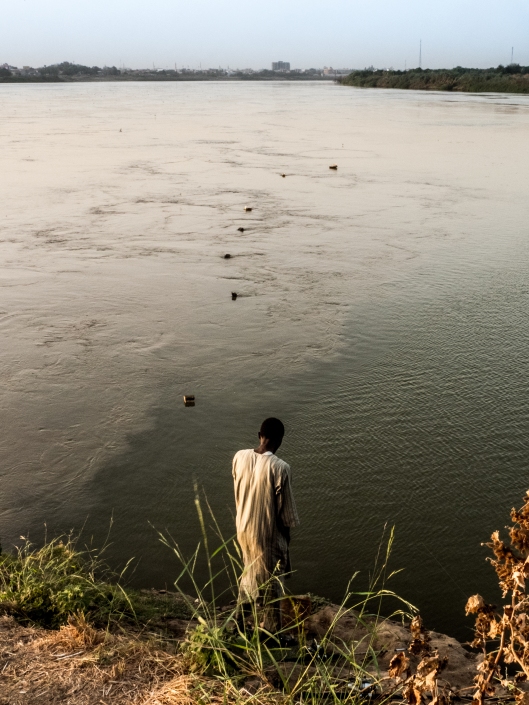 The White Nile and the Blue Nile join

Confluence of the Nile

Dinner was at a fish restaurant – no choice, just heaps of extremely fresh fried fish with fluffy bread and spicy sauce. Then, back to the airport where we sat on chairs and looked at a wall for a couple of hours until it was time to board the plane. Apparently, Khartoum International Airport doesn’t have a VIP Champagne lounge. Funny that.

A woman dusting the dust. Don’t ask me why.

So overall, how did I like the trip? It had its hardships (mostly of the toilet variety) and Khartoum itself was filthy and dusty and quite hard work. But it was nevertheless a great weekend and worth every penny and minute spent. Thanks again Trekkup!

2 thoughts on “The other pyramids – a weekend in Meroe, Sudan”